Showing posts with the label Weird Bible Interpretations
Show all

Behemoth's tail isn't about his tail. It's about his penis (part 2) 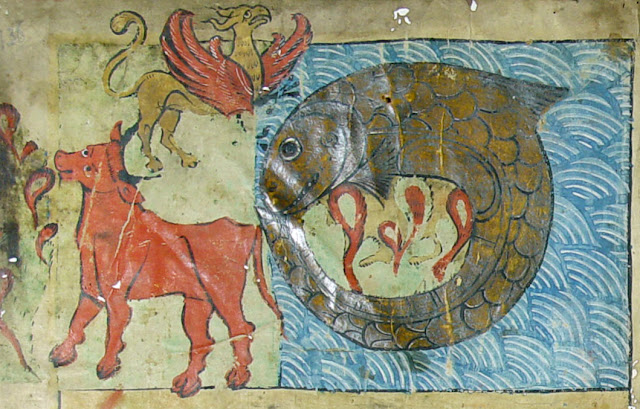 In my last post , I argued that the monster Behemoth in the biblical book of Job was a mythic Semitic chaos deity. We can infer this because we can be certain his literary ‘twin’ Leviathan was. Leviathan breathes fire, has multiple heads, and is openly related to the chaos dragon god in Mesopotamian and West Semitic Baal mythology by the biblical authors themselves.  This post continues my response to an article from Creation.com by Paul Price that attempts to argue Behemoth was a sauropod dinosaur. Price argues this mainly on the basis that the book of Job compares Behemoth’s tail to a cedar. Contrary to Price, I believe Behemoth was most likely a mythological super-ox based on features of the Hebrew texts and comparative ancient mythology. What about his cedar-like “tail”? I think there is firm evidence that the Hebrew term for “tail” here is actually a euphemism for the creature’s penis—a view shared by scads of Jobian specialists.  Only a liberal evolutionist would claim Behemoth
3 comments
Read more 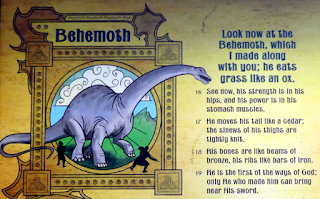 Creation.com has published this piece attempting to debunk my research on the biblical monster Behemoth. Those of you devastatingly attractive loose-cannon rock stars that have read my book on the Creation Museum (Why haven’t you? The reviews melt faces.) know that I argue Behemoth was not a real animal, but a west Semitic chaos deity. Along with many Semitists from backwards, rinky-dink institutions you’ve probably never heard of like the Hebrew University of Jerusalem or Oxford, I believe Behemoth was probably a mythological creature based around the attributes of a bull--a view going back to early Judaism.  Additionally, examining features of the Hebrew texts, I agree with many translators like Rob Alter at Berkley or Edward Greenstein at Bar-Ilan University that the infamous verse about Behemoth’s tail being “like a cedar” is likely a reference to the creature’s penis. That last sentence is what we call foreshadowing in the writing biz and is designed to hold everyone's int
2 comments
Read more
More posts